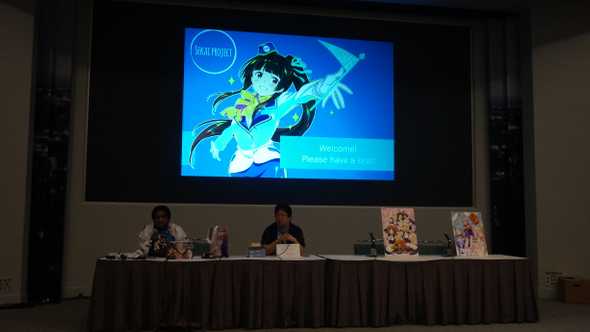 Riddled with technical difficulties and failures in panel management, the Sekai Project panel was in one part the bad side of Sekai Project we’re used to seeing, but it wasn’t just that: on a special occasion they do something great, a big announcement that many were looking forward to.

Before I get into news, I need to note that AX and the fallout from it made me rather busy so this info isn’t particularly new, but since I was there I can talk about aspects most news articles will do like the atmosphere of the room and the cadence of the announcements, so even if you know the news from these next few articles, you may still get something from reading this.

Also, I have to say that going to a VN panel is always a blast, with everyone there all being interesting to talk to, knowledgeable and some of the most friendly people I’ve met (and the fact that we can talk about VNs is so cool :D). When I first got there I was afraid that I was surrounded by people only interested about Nekopara given the “helpful AX staff” that was calling the panel “the catgirl panel” and the joking by the Sekai person running the panel, after a few Q&A questions and announcements, they showed me that I was dead wrong, making it one of the most entertaining panels I’ve been to. :)

They started off by showing stuff that should have been shown at Sony’s E3 Conference, the Fault and RabiRabi trailers for PS4 and Vita. It was nice to see because they totally got shafted by Sony, but it was pretty much what we were expecting. After that they then taunted me, Dex, and everyone who Kickstarted WEE by announcing physicals for the PS4 & Vita, and KS people get a “priority”. Great job putting your paying customers first, right?

After that they showed a new game that’s actually being developed in house, a game called Japanese School Live. There’s nothing overly unique about the game itself, but the fact that Sekai Project is making their own school is noteworthy, and we may see them branch out into more interesting titles in the future. This’ll come out sometime in October. You can identify if it’s an in house game if it’s being developed by Code:jp, the name for their new developer house.

Next was a pretty interesting and entertaining game called Shining Song Starnova, where everyone has some sort of issue, like being an alcoholic or being totally chunni. The trailer doesn’t have much, but being in a room full of people not knowing what’s to come from it, seeing this trailer had us erupting in laughter, a fun twist on a stale and well trodden genre. They showed us a clip from the VOs that’s on their YouTube then announced a fun little RPG called A Magical High School Girl and The Mysterious Way Home. Most people seemed about disengaged because nothing worth noting was been anounced game wise, then the person running the panel said the next game they were going to announce was equal to them as getting Clannad.

And then the crowd erupted. BALDR SKY? After what seemed to be a lackluster AX for Sekai, we got one of the highest regarded VNs in the market with almost nobody expecting them to announce it (Including Sekai Project, they got the localization rights 4 days before the panel). I never expected it to come and most people didn’t have hopes for it coming soon, so to see it announced live in an audience, everyone flipped out and most were excited. This was made even better when they announced they got 2 as well. I was looking forward to this since I saw Craxuan’s posts, but now that I know I can get these games, I am completely looking forward to them.

That pretty much made everyone’s day, as nobody really expected that. With this in everyone’s mind, they opened the floor up to Q&A, telling us that they pretty much know what we did when it comes to Baldr Sky, so they couldn’t give much info about that. For your information, I’m paraphrasing since I don’t type fast enough to do word by word and I may have missed a question or 2.

Q: Lately we have seen localization for VNs on Consoles, is this a major aspect of Sekai Project or a one off thing?
A: It’s where Sekai Project wants to go in the future, to go in this direction.

Q: Do you have an estimate for times for a vita release of games like World End Economica or Grisaia? (This was my question)
A: Cannot tell, don’t want to be held accountable to a date.

Q: Where is the manga for GATE?
A: SP got the OK for the physical, so it should be available soon.

Q: Do you plan on releasing on other platforms than steam like GOG or Humble Bundle?
A: Maybe, but it depends on the wishes of our partners.

Q: With the sucess of Nekopara, would it be possible for your new idol game ot have cat ear options?

The Q&A seemed to be mostly an attempt to be open to the community but failing, as they avoided questions and told mostly nothing of worth with most of the answers being to silly stuff, but at the end someone asked a question that was hilariously avoided than not, asking if Saiyori-san’s other project, Boku to Koisuru Ponkotsu Akuma will that ever get a localization, which they said that they don’t know, only to announce it seconds later.

They then had technical difficulties, to the point that they had dovac pull up the last few trailers on YouTube to stream for us (after Boku to Koisuru Ponkotsu Akuma, they announced SakuSaku) which combined with the horrible con internet and them trying to stream on their iPad led to freezes being inevitable.

They even joked about the fact that if it gets any worse, they’ll have to do it in interpretative dance, which is kinda a good way to see panel in a nutshell. This will be remembered for the bombshell of Baldr Sky (Which is awesome!!), but outside of that announcement, for those in the audience or watching the livestream, it was an awkward set of announcements with lots of humor and technical difficulties. It was all worth it in the end, but the roller coaster to get there could have been more pleasant and interesting.